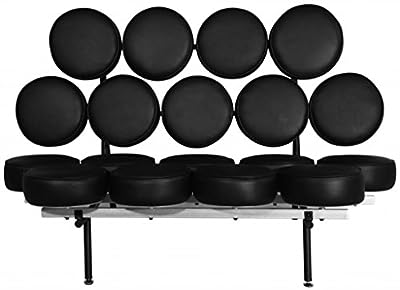 Maintenance:
vacuum with soft brush nozzle, clean with some special oil, no wet towel, no direct sunlight, no heat, no sharp objects

Product Story:
Design by George Nelson and Irving Harper, 1956. The playful Marshmallow Sofa is a landmark of modern design that's still turning heads and making people smile. The sofa originated from the discs that are its hallmark. The original George Nelson Marshmallow Sofa was conceptually designed in 1954. At the time, George Nelson was not working alone. The actual designer of the Marshmallow Sofa was Irving Harper, an employee of the George Nelson Group. George Nelson took credit. First production of the sofa began in 1956. The sofa ended production in 1961 with only 186 original pieces being produced. Some were available with cushions all the same color and some had multiple colored cushions.
As with many mid-century classics, the Marshmallow sofa gained in popularity as the years went by. It was featured in pop art publications and a variety of big screen pictures. By popular demand the Marshmallow sofa was re-introduced in the mid 1980's in the form of reproductions of the original design and continues to be made to this day. The Marshmallow sofa was designed in the "Atomistic" style, which explodes its parts into separate, brightly colored elements. In this case the elements are the cushions, which float on the frame, it is not only astonishing in its appearance, but also surprisingly comfortable.